Dance in the District | The Craft of Storytelling

Register here for the zoom link
Thank you! Your submission has been received!
Oops! Something went wrong while submitting the form.
Series Details 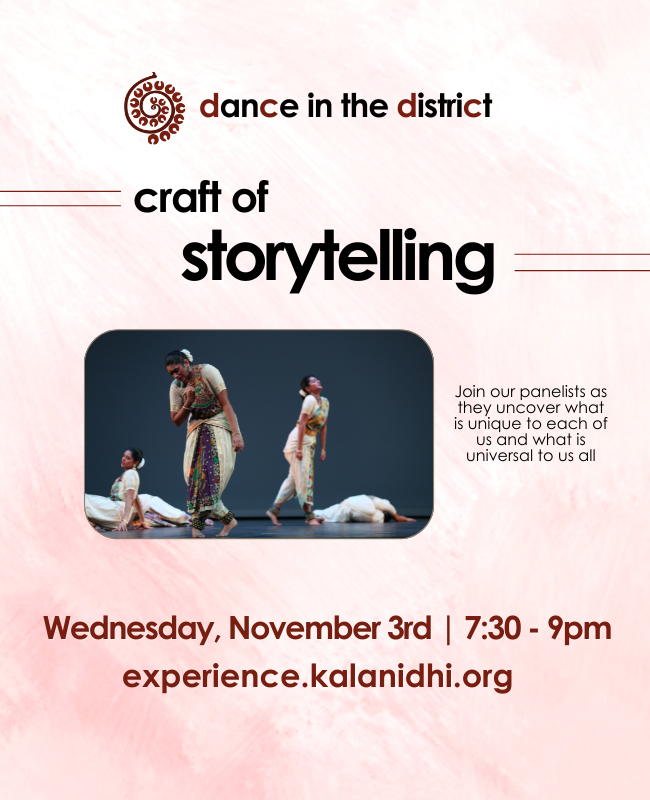 The evocative power of art often lies in the telling of a good story. But what is it that makes for a compelling story? In our final panel discussion, our panelists will explore the craft of storytelling, sharing the tools they have each discovered for telling stories that are at once unique and universal. We hope you will join us with your questions!

Prior to becoming Artistic Director of the IN Series Timothy Nelson was active in both North America and Europe as a director, conductor, designer, and educator. He recently directed L’Incoronazione di Poppea and Il Ritorno d’Ulisse in Patria at London’s Barbican Hall for the Academy of Ancient Music, Un Ballo in Maschera, Fairy Queen and Jephtha for Iford Arts Festival, and Les Pêcheurs de Perles for the Nationale Reisopera, where he also created productions of The Lighthouse and La Nozze di Figaro. Other work includes productions of Rigoletto and Madama Butterfly for Sardinia’s Festival Ente Concerti, Aureliano in Palmira for the famed Festivale della Valle d’Itria in Martina Franca, Riders to the Sea for Amsterdam’s Grachtenfestival, Dido and Aeneas and Vivier’s Love Songs for the Rotterdam Opera Days, La Voix Humaine for the Residentie Orkest of the Hague, Giulio Cesare for Opera London, and European touring productions of Where the Wild Things Are and L’Enfant et les Sortileges for the Dutch National Opera and NJO. From 2002-2012 he served as Artistic Director of American Opera Theater, followed by a tenure as Artistic Director and Head of Music of the Netherlands Opera Studio and Nieuwe Stemmen of the Rotterdam Operadagen.

With IN Series he has created pioneering work that has propelled that company to regularly lead Best of... lists in media outlets of the nation's capital. Over the course of the 2020-2021 season Nelson developed INvision, a virtual multi-venue performing arts center housing digital content created by numerous innovative opera and theater companies across America. His own work in this platform has included films of Gluck's Orphee et Eurydice, Schumann's Frauenliebe und Leben, and the recently released King Harald's Saga by Judith Weir.

Anuradha Nehru is the founder and artistic director of the Kalanidhi Dance School and Company. An award-winning Kuchipudi dancer, teacher, and choreographer, Anuradha has taught dance for over thirty years in the United States. She has served as the Artistic director of Kalanidhi Dance for the past 30 years, which has grown into one of the leading Indian classical dance schools and performing companies in the United States.

Under her leadership, Kalanidhi dance has performed at several prestigious venues and dance festivals in the U.S. and around the world. She believes in staying true to the depth and beauty of the Indian classical dance style while pushing its boundaries to explore new avenues of creative expression.

Her ability to transcend artistic genres is best exemplified in her collaboration with Opera Lafayette in three different operatic works between 2013 and 2018. Her other major productions include, ‘Rasa’, ‘Transcending Traditions’, the historical ballet ‘Bhagmati’, ‘Why We Dance’, ‘Poetry of Love’ and “Bhoomi”. Anuradha has been recognized by the Governor of Maryland for her dedicated service to the arts and has been supported by the Maryland State Arts Council. Recipient of several awards which include, the Pola Nirenska award (2020), Outstanding Artist award from the Arts and Humanities Council of Montgomery County (2016), National Foundation for Advancement in the Arts award, and the Master Apprentice award from Maryland State Arts Council, Anuradha continues to shape the next generation of outstanding Kuchipudi dancers.

El Chelito is the artistic name of Eric Swartz, a queer, Salvadoran-American theater maker living and working in his beloved hometown of Washington, DC (Nacotchtank/Piscataway).

Bilingual and bicultural, he makes his way as a director, producer, writer, designer, performer, stage manager, technician, and audience member. He is a former Artistic Associate with GALA Hispanic and Associate Artistic Director at Theater Alliance.

Additional area collaborators include Young Playwrights’, Forum Theatre, and Pointless Theatre Co., where he is a Company Member. Beyond the DMV, he has worked with the Latino Theater Company in Los Angeles and serves on the Steering Committee of the Latinx Theatre Commons. Upcoming collaborators:Extreme Lengths Productions and Imagination Stage.

Elisa is from the Washington, DC area, and received her early training from the Academy of the Maryland Youth Ballet, studying with Tensia Fonseca, Michelle Lees, Eric Hampton and Rhodie Jorgenson, amongst others. She received her BFA from the Juilliard School, under the direction of the late Benjamin Harkarvy. While in school she had the opportunity to work with and perform with the Nederlands Dans Theater as part of the Lincoln Center Festival.

In addition to being repetiteur and rehearsal director for Mr. Battle and Mr. Morris, she has assisted choreographers Carolyn Adams, Adam Hougland, and Igal Perry at NYSSSA, Juilliard and Ailey II respectively. In 2011, she rejoined the Lar Lubovitch Dance Company, performing featured roles with Clifton Brown. Ms. Clark has also danced for the Metropolitan Opera Ballet at Lincoln Center in productions choreographed by Mr. Morris, Ben Wright and the innovative Crystal Pite. In 2013, Ms. Clark joined the Alvin Ailey American Dance Theater, having the honor of dancing the legendary work Revelations over 100 times per year, while traveling the world six out of every twelve months!

She was on the faculty and Advisory Board of the New Jersey Dance Theater from 2001-2014. From 2002-2006 she was also on an Advisory Panel for Capezio, where she helped test out new footwear and products. Ms. Clark is a member of AGMA, and is a certified Life Coach, frequently leading seminars, empowering artists to navigate their respective field.   Since 2017, she has held adjunct faculty positions at the University of the Arts in Philadelphia, Marymount Manhattan College, the Ailey School/Fordham University and Princeton University, besides teaching master classes and being guest faculty at a variety of summer programs including the University of Oklahoma, the University of the North Carolina School of the Arts, and the brand new virtual program Training Pointe, where she is also an advisor.  Finally, Ms. Clark is currently a performing artist with Monica Bill Barnes & Company, touring alongside Ms. Bill Barnes in Happy Hour.

Kasi Aysola is a well-known and accomplished Kuchipudi and Bharata Natyam dancer, choreographer, and nattuvangam artist. He trained under the celebrated Guru Viji Prakash and Mythili Prakash in Bharata Natyam; and under the late famed Guru Vempati RaviShankar and Yamini Saripalli in Kuchipudi.

Kasi, a prolific choreographer and performer, has presented many solo and group works in the US, India and abroad. He has received recognition and funding from various organizations such as the National Young Arts Foundation, Alliance for California Traditional Arts, Arts and Humanities Council of Montgomery County,Maryland State Arts Council, Boston Live Arts, and National Academies Keck Futures Initiative.