Dance in the District | Myth and Tradition

Register here for the zoom link
Thank you! Your submission has been received!
Oops! Something went wrong while submitting the form.
Series Details 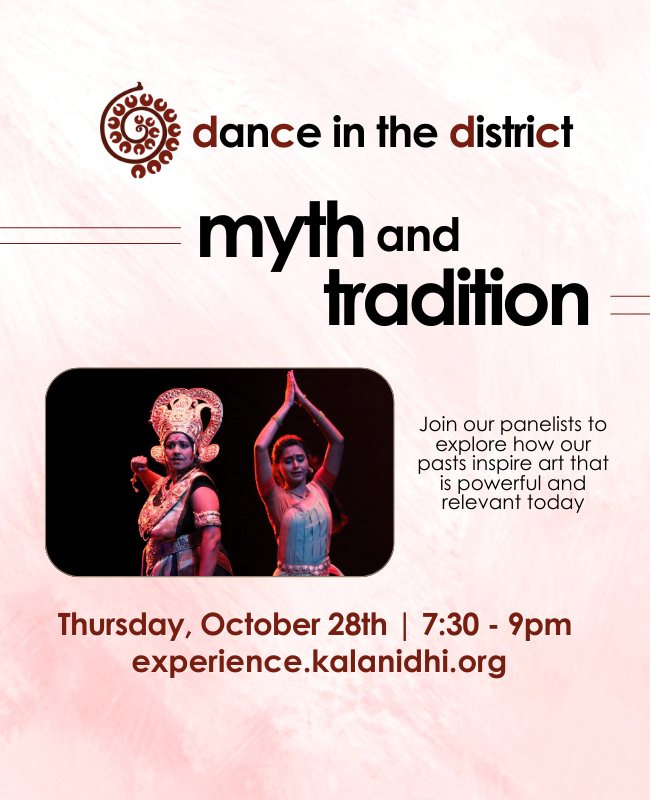 Our myths are our stories. They are the stylized tales of our past that offer a lens for our present. In the third discussion of our series, a varied group of DC-based artists from across disciplines will come together to discuss the role of myth in their creations. From the traditional legends of cultures and peoples around the world to the personal mythologies that live within each of us, the panelists will explore how our pasts serve to inspire art that is enduringly powerful and evocative.

Robert (Bambi) Woofter is a control freak, sporadic drag hobbyist, and founder of dance and film company haus of bambi (hausofbambi.com). His work has been commissioned for Vogue.com, the John F. Kennedy Center, and The City of Alexandria and has been presented in New York City at the wild project, Movement Research at Judson Church, Dixon Place, and Triskelion Arts. Robert embraces fantasy as a means of truth-telling and his work seeks to strut the line between the gaudy and subdued, the crude and refined, and the classical and contemporary. Robert holds an MFA from the University of Michigan and teaches at American University and Dance Place in Washington, DC.

Christopher K. Morgan (he/him) is a choreographer, educator, facilitator, curator, and arts administrator. As Executive Artistic Director of Dance Place in Washington, D.C., Christopher stewarded the organization through the triple pandemics of 2020 and 2021 maintaining the entire staff with no layoffs or furloughs, while continuing to pay artists and teachers. He oversees the curation of 30+ weekends of performances and artist-centered projects, The Dance Place School, a 50 person staff and faculty, and shepherds Dance Place’s role as a neighborhood community arts center and nationally prominent performing arts presenter.
Christopher founded dance company, Christopher K. Morgan & Artists, in 2011; the same year Dance Magazine profiled him as one of six breakout choreographers in the United States. His artistry and the company have been recognized with multiple awards and grants. Teaching credits include American University, the BA and MFA programs at the University of Maryland. Since 2006 Christopher has also directed Art Omi: Dance, an annual collaborative residency for international choreographers in New York. Known as a thoughtful advocate for cultural integrity, inclusivity, and diverse representation in the studio and on stage, Christopher's Native Hawaiian ancestry and wide-ranging international performance career influence all aspects of his work. In 2021, Christopher was nominated by President Biden to join the National Council on the Arts and is awaiting a Senate confirmation process.

Kasi Aysola is a well-known and accomplished Kuchipudi and Bharata Natyam dancer, choreographer, and nattuvangam artist. He trained under the celebrated Guru Viji Prakash and Mythili Prakash in Bharata Natyam; and under the late famed Guru Vempati Ravi Shankar and Yamini Saripalli in Kuchipudi. Kasi, a prolific choreographer and performer, has presented many solo and group works in the US, India and abroad.

Srilekha has been a part of Kalanidhi Dance for more than 18 years. Having stumbled upon the Kuchipudi art form by chance at the age of 6 through the dance school of her aunt, Smt. Rajani Malladi, Srilekha was thrilled to join Kalanidhi as a student in 2003 and she has remained enchanted by the art form ever since. In 2007, she debuted with the Kalanidhi Dance Company as part of the original Rasa production, and she was part of the troupe that took the show on tour to Hyderabad, Chennai, and New Delhi that year. She has since performed in Kalanidhi's original Bhagmati and Bhoomi productions, and toured with the company in venues across the United States. As Srilekha has moved around the world for her academic education and legal career, she has brought Kuchipudi with her. She performed repeatedly at Columbia University during her time there, and presented solo performances at the Raindrops Festival in Mumbai in 2013 and in London in 2015. More recently, she helped lead Kalanidhi’s flagship virtual Seasons production over the 2020-2021 year. She currently lives in Miami, FL, where she works as an Assistant Federal Public Defender, and helps to develop Kalanidhi's artistic work.