Dance in the District | History of Kuchipudi

Thank you! Your submission has been received!
Oops! Something went wrong while submitting the form.
Series Details 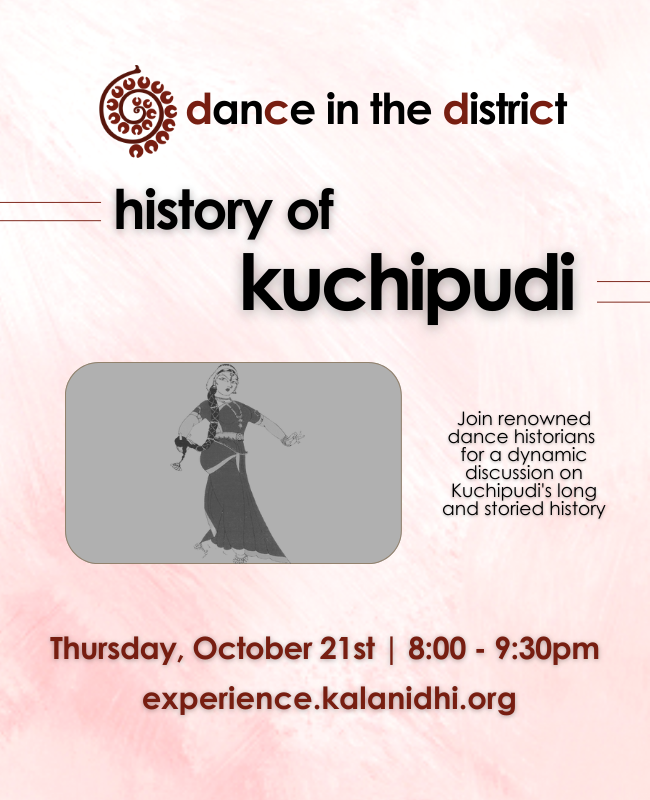 So what is Kuchipudi anyway? Join renowned dance historians Yashoda Thakore and Rumya Putcha for a dynamic conversation on the storied evolution of the Kuchipudi style of dance and theater. From the influences of British imperialism to the aesthetics of the Indian film industry, Thakore and Putcha will travel through time, bringing to life the beautiful and diverse cultures and people that have given shape to the art form we know and love today.

Yashoda Thakore descends from a long line of Kalavantalu dancers (hereditary women singer / dancer families). She is a renowned performer of Kuchipudi and Devadasi Nrityam. She has a PhD for her research on the Interrelationship Between Yoga and Indian Classical Dances and  authored “Kaivalya-Joy in Yoga and Dance” (2014), co-translated and critically edited “Nritta Ratnavali”, a 13thC text. She was an artist in Residence at the University of Pennsylvania (2019), and performed at the Wesleyan University (2019). Yashoda is a Chair for Kuchipudi Department at The University of Silicon Andhra, California. She was conferred the Bangalore Nagaratnamma award (2017) by the Samskruti Organization, Guntur and the Ugadi Puraskaram by the Government of Andhra Pradesh. Yashoda works relentlessly to recover the voices and dances of the Kalavantalu women and to bring the next generation of artists from her community back to singing and dancing. Her main goal is to increase awareness and pride in these art forms.

Rumya S. Putcha is an assistant professor in the Institute for Women's Studies as well as in the Hugh Hodgson School of Music. Her research interests center on colonial and anti-colonial thought, particularly around constructs of citizenship, race, gender, sexuality, the body, and the law. Her first book, The Dancer’s Voice: Performance and Womanhood in Transnational India, develops a critical race and feminist approach to Indian performance cultures and is under contract with Duke University Press. Her second book project, “Namaste Nation: Orientalism and Wellness Cultures in the United States” extends her work on transnational performance cultures to critical analyses of capitalist fitness industries within legal and affective discourses of body, race, wellness, and citizenship.

Kasi Aysola is a well-known and accomplished Kuchipudi and Bharata Natyam dancer, choreographer, and nattuvangam artist. He trained under the celebrated Guru Viji Prakash and Mythili Prakash in Bharata Natyam; and under the late famed Guru Vempati Ravi Shankar and Yamini Saripalli in Kuchipudi.
Kasi, a prolific choreographer and performer, has presented many solo and group works in the US, India and abroad. He has received recognition and funding from various organizations such as the National Young Arts Foundation, Alliance forCalifornia Traditional Arts, Arts and Humanities Council of Montgomery County, Maryland State Arts Council, Boston Live Arts, and National Academies Keck Futures Initiative.